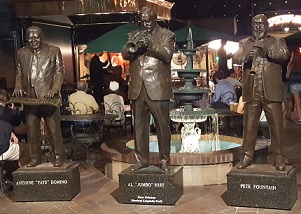 As mentioned in my article, “Letting the Good Times Roll: Some Mardi Gras Inspiration for Game Night!,” I went to New Orleans, Louisiana last September. While there, I got to try all kinds of amazing foods that spanned a full pallet of flavors! Some, like the beignets from Cafe Du Monde, were very sweet and others, such as the corn and crab bisque that we were taught to make while attending a lesson at the New Orleans School of Cooking, were hot and spicy! This Mardi Gras, I’d like to pay homage to everything I learned in the Crescent City as well as upholding my own family’s traditions for the festival so I’m going to provide you with a little bit of both!

When I think back on my trip, I think not only of the fun and the people I encountered as part of the tour as well as the residents, but of the divine foods and how they seamlessly blend with the diverse types of music that is often filling the streets. In my opinion, the flavors of New Orleans are what leave the biggest impression on its visitors; they dance across one’s tongue almost as well as the patrons jiving to the live jazz all over town. With Zydeco and Dixieland/New Orleans Jazz playing in the background as I cook, I find myself transported back to the jazz halls and bars on Bourbon St. However, it also reminds me of the groups jamming on and in Franklin Avenue, which we only made the trek towards after a few restaurant and lounge suggestions from our gracious host from our evening at the New Orleans School of Cooking.

After that fabulous night filled with folklore, laughter, exceptional food and beer, and learning some new-to-me cooking techniques, I also walked away from my class from the New Orleans School of Cooking wth a few recipes – and, later, a cookbook! My favorites from the evening are the corn and crab bisque and the jambalaya recipes. As I’m already serving a mild shrimp gumbo on rice, I wanted to include something with some heat to it as well as a few less carbs so I decided to go for the corn and crab bisque as an option for my friends. This is a recipe you can make as mild or hot as you’d like and I tend to leave the bottle of liquid crab boil nearby so people can add more heat if they want it.

Corn and Crab Bisque from The New Orleans School of Cooking

Combine milk, heavy cream, and stock in a large pot. Bring to a boil, then reduce to a simmer for 10-12 minutes.

Combine flour and butter to make a roux; add to simmering pot once desired color of roux is reached.

Stir in corn with liquid and crab meat. Simmer for 5 minutes. Gradually add in 1 c of green onions, salt and seasonings to taste.

For years now, I have made my grandmother’s shrimp gumbo for Mardi Gras. It has been one of my favorite recipes of hers for decades with the wonderful combination of shrimp, tomatoes, peppers, onions, and okra and I can already feel my mouth beginning to water just thinking about it! Most of my family doesn’t like a lot of heat to their food, so this is an extremely mild (no heat at all, honestly) gumbo recipe. It can be made ahead of time and stored in the freezer or stored after being made – just remember not to mix in the rice if you’re going to store it! The recipe below is a slightly modified version of my grandmother’s.

Salt and Pepper to taste

Melt butter. Stir in flour and cook over low heat until slightly brown. Add garlic, onions, and green pepper; cook slowly until tender. Add tomatoes and the rest of the ingredients except for rice, shrimp, and parsley. Simmer uncovered for 45 minutes. Cool; refrigerate until ready to serve.

What would a celebration be without dessert? Traditionally, there is a King Cake, but, as I didn’t have time to make one this year, I’m probably going to order one from my favorite local bakery: Ettore’s! They’re offering them in chocolate pecan, cherry, or apple this year and, I will admit, I’m having a hard time deciding which one I want. However, I’m also going to be serving beignets! Though I can also order these from Ettore’s (only on Tuesday, however!), I have decided to make them myself! There are tons of recipes available for these and some of them even have fruit in them! This year I will not only be making a few from scratch, but I also picked up a Cafe Du Monde box mix so I can compare my recipe to their mix. After serving Abita beer with the main courses, I’m going to serve my desserts with, you guessed it, chicory coffee!

Hope you enjoy these recipes and have a happy and safe Mardi Gras!

In December of 2015, The Key Armory introduced their first set of key designs through a Kickstarter campaign. Inspired by weaponry from various fandoms including Lord of the Rings, Star Wars, various video games, and animes, the first keys that were announced for the campaign were: the Hero’s Sword, King’s Blade, Kingdom Key, Star Saber, and Halfling’s Blade. Needing to raise $10,000 for their goal, there were also hopes for additional designs to be added as Stretch Goals. I joined in on the campaign in the fairly early stages and was thrilled to learn that the stretch goal key designs were actually going to be decided by the backers ourselves!

At the end of the campaign, the number of keys being offered had been doubled! We, the backers, had voted in another five designs: the Runeblade of Ner’zhul, Eye of Thundara, Gunblade Revolver, Royal Shield (not a sword, I know, and I was a bit skeptical of it at first until I saw the finished product), and the Blade of the Direwolf. As much as I had liked the original keys, I was really excited about the Runeblade of Ner’zhul as I am a rather large fan of World of Warcraft and immediately knew what key I had to have for myself! The timing for the suspected delivery for these also happened to be perfect for a birthday gift for a geek friend of mine so I also picked up a second key, the Eye of Thundara, as a surprise. Not only was he a fan of Thundercats, but it is a bit of an inside joke between us as well.

I will admit, I had a few concerns about how the final product would look by the time I received it. My biggest concern was over how the details would look etched into the keys versus the cut out sections. Would the etched details be deep enough to show up? Would the different depths of the details still be visible enough from a distance to see what the sword looks like or would you have to use your imagination a bit more? I was also concerned about the actual size of the key. Obviously, these keys would be a bit bigger than your average house key, but just how big is “a bit bigger”? Would they be so gigantic that I would have to change how I keep my keys in my pocket? Should I just be considering using these as a display or novelty item instead of as a functional key to my home due to their potential size? I needn’t have worried, however! Upon their arrival, these keys have proven themselves to be sturdy, stunningly detailed with good craftsmanship, easy to get cut, a perfect fit on my keyrings (though I have enough keys to keep track of now that I no longer keep my keys in my pocket as much), and they have made some great conversation pieces!

The customer service at The Key Armory has proven to be top notch as I had several interactions with them after the campaign ended and I am looking forward to working with them again as they have launched their new Kickstarter campaign. This time they are not just introducing five more designs (the Soldier’s Sword, Sword of Foresight, Power Sword, Defender of the Universe, and Blade of Alfheim), but are also hoping to expand their offerings of keyway types to include Yale keys in addition to the Kwikset and Schlage keys that were offered in the last campaign. Personally, I’m thrilled as it means I can now pick up a few more keys as gifts for my friends overseas! As with their last campaign, there are more designs waiting to be added to the list of offerings and I can hardly wait to see what we add!

I can not recommend these keys enough. They’re fun, good quality, span numerous fandoms so that many of my geeky interests are met, the people at The Key Armory are just wonderful people to work with, and these keys are just amazingly detailed! I can honestly attest that everyone who has seen my house key has asked me either where I got it or if I will get them one too! Though a bit on the pricey side for key blanks (they go for $12 retail or $10 as part of the Kickstarter campaign), I still feel they’re worth picking up and, should you not want to use them for your home, they are something fun to simply collect and display.